Headed out in the morning around 10am and grabbed a donut at the same cafe for breakfast on the way to the metro station. After arriving at the metro station near Vatican city, I was "greeted" by many tour promoters who stressed on the length of the 2 queues at the Vatican city if I were to go alone. Decided to go for the tour eventually and paid €49 for it.

After awhile of waiting, a lady tour guide came along and led us to Vatican City. Unfortunately, her English pronunciation wasn't that great and it can be easy to miss out some points she was trying to bring across. We started in the St Peter's square with an introduction to the Vatican City, popes, archbishops and Simon Peter. We also had a view of St Peter's Basilica from the square. 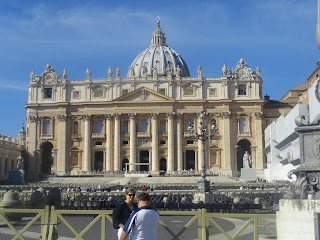 After the introduction, more people joined the group and we proceeded to the Vatican Museum. We explored the museum for quite awhile and ended the tour at the famous Sistine chapel which is covered with Michelangelo's painting on the ceilings. It certainly took him many years to complete that painting.

From the Sistine chapel, it was possible to enter St Peter's Basilica without joining the famous long queue outside which might take 1 to 3 hours to get in. The tomb of Simon Peter lies somewhere under and inside the basilica and the sight of this biggest basilica in Europe is awesome. I did not join the queue and pay to climb the steps up the dome though.

After the visit, I grabbed a quick bite for lunch and just roamed around aimlessly for the afternoon. In the evening, I was resting in the garden near colosseum and also walked over for some night shots of the Colosseum and the Arch of Constantine. After taking some photos, I headed back to hostel.

On the way back, I spotted a Chinese restaurant near hostel and decided to give it a try for dinner. I ordered vegetable dumplings, seafood soup (more like egg soup with prawns), chicken with cashew nuts, rice and also had a 1 litre bottle of cola (I wasn't expecting large to be 1 litre). All this costed €13.10, which I thought was pretty good. The restaurant is nicely decorated and the food was pretty good. It also feels good to communicate using mandarin actually. After the nice dinner, I went back to hostel to rest for the day. 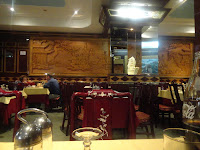 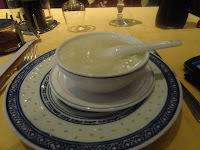 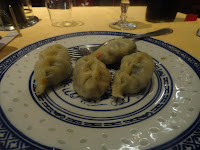 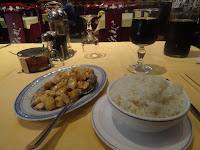 For more photos from Vatican City, check out my photo gallery here.
on Friday, October 19, 2012