Started the day by packing up and checking out, but putting my luggage in the luggage room. I headed to the lavenderia with my laundry soon after.

It was a short 10 mins walk to the nearest self-service laundry shop. I paid €6 to use the washing machine and another €1 for the detergent. After about 30mins of washing, I transferred my laundry to the dryer and paid another €7 to use it. I was not so familiar with dryers, so I wasn't sure what setting to use. A lady suggested to me that I can set it to 80 degrees and then check periodically. For €7, the dryer will spin for 30 mins. After some struggles of checking and using the machine, I collected my clothes though some were not thoroughly dried. Headed back to the hotel and packed in the clothes before I head out again to spend the rest of the free time I have for the day.

I took a slow walk to the direction of Rialto bridge as I was thinking of getting one nice t-shirt with a picture of the Rialto bridge. The t-shirts costs €10-€15 in most places, but I remembered it costs below €10 somewhere near Rialto bridge.

Along the way, I rested in one square while waiting for lunchtime. I settled for lunch in a restaurant nearby that had a tripadvisor recommended sticker on the door. I decided to have simple spaghetti and opted for spaghetti bolognese. I was also thinking of having a fish dish and ordered mixed fried fish. To my surprise, it was served with calamari and prawns as well. Guess they group all seafood as fish dishes. Nevertheless, it was a pretty good meal. I paid €28 including bottle of water and €2 cover charge, but there was no service tax. 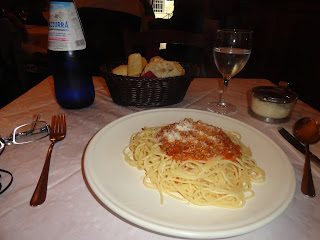 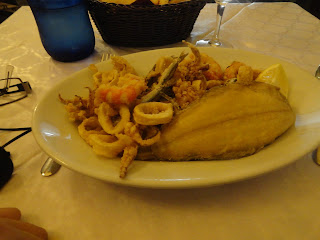 After lunch, I continued my way to Rialto bridge. As I get near to the Rialto bridge, I saw a shop that had the t-shirt I liked and it costs €7. But alas, I became hesitant on buying it since I have so many t-shirts already. I hanged around Rialto bridge for a little while before heading back to hotel. 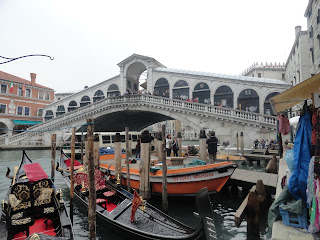 I rested in the hotel's "lounge" for quite awhile before I made my way to the bus terminal at 4:20pm. I reached the bus terminal at about 4:35pm but the bus wasn't around yet. The scheduled departure time is 4:50pm and I saw the bus arriving less than 5mins to the scheduled time. The passengers alighted and the rest of us who were waiting placed our luggage in the storage compartment before boarding the bus. It was about 30 mins of bus ride to the airport, so I had quite a bit of time to rest at the airport while waiting for checkin.

After checkin, I went to the departure halls in search for dinner. Unfortunately, it seems like the choices were limited. Managed to find the food court but the queues seemed to move so slowly and the menus were a little confusing. Decided to queue for sandwiches but later realised the pasta queue moved faster. Had to grab a quick bite while making my way to the boarding gate eventually.

Boarding started a little late and we needed several shuttle buses to send us to the plane. The plane took off at around 8:55pm, which is about 10 mins later. The plane landed in Paris at about 10:35pm and I collected my luggage rather quickly. I was trying to find the bus service that goes to the city centre from Orly airport and got a little confused. So, I tried to check the ticketing machine for the train service and was told the last train is almost leaving.

I then decided to take a taxi ride instead and was approached by a private taxi driver offering €40 to take me to my destination. It was certainly a freezing night and my hands were feeling too cold for comfort. There was a little queue for the public taxi, but this guy was offering similar price. So, I decided to take his offer and headed our way to my hotel.

Upon reaching the hotel, I checked in quickly and went up to my room. Unpacked, bathed and hid under the blankets while using my table with the WiFi service. Unfortunately, only one connection is allowed and I guess the connection is locked to my tablet while the account is valid for the full 3 days. Couldn't really sleep for some reason and stayed up late till about 2am. Then, I realised that 2am seems to be the time when all electricity is cut-off. Decided to try and sleep then. When I woke up for a short moment at 6am+, I realised all electricity is available again. 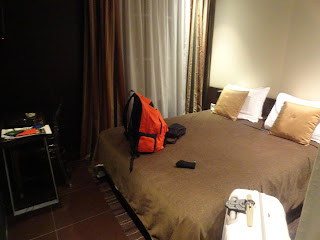 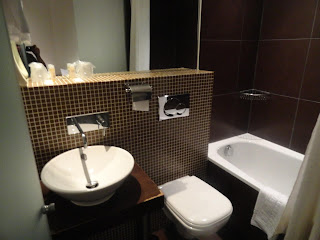