Woke up really early and couldn't go back to sleep at around 7am+. An aggressive room-mate wasn't happy with the sounds I created and hurled vulgarities at me, chasing me out of the room. He even insisted I change room when I get back. I quickly got out of the room and started my day early.

Took the metro and transferred to the RER service, heading my way to Disneyland. At the entrance, I was already awed by the beautiful and magical sight. Headed fo the Disneyland Park first and started the visit with a stage show by the famous Disney characters. The compere was speaking in English while Mickey and Minnie were speaking in French. It's also part Halloween celebration as Halloween is just around the corner. 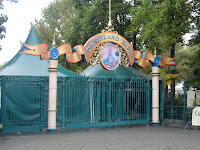 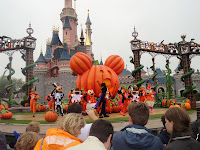 With Halloween theme, there were several huge pumpkins carved to the shapes of Disney characters in a square/garden. The Halloween theme aound Disneyland was pretty cool. Walked around, took some rides and took lots of photos during my visit. I even went for a up-close with Mickey Mouse for 3 photos, of which I bought one of them and had it framed. 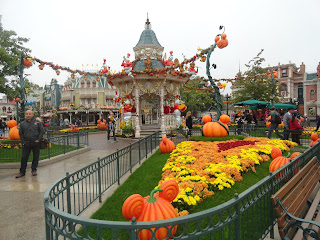 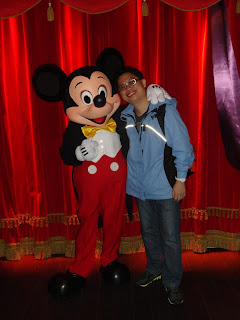 Had a late lunch at 2pm+, eating baked penne in the food court and headed to Walt Disney Studios Park after. Apparently, there were more exiciting rides over at Walt Disney Studios, e.g. Aerosmith-themed high speed roller coaster, one car ride that speeds on a U-shapped track, swinging like a pirate ship ride but probably much faster. 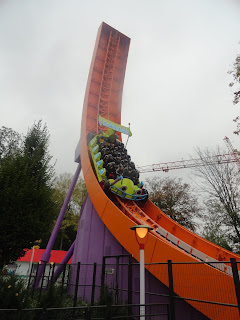 There was also one interesting show called Stitch Live, which was pretty similar as Donkey Live in Universal Studios Singapore. At the end of the show, we even had to guide Stitch is escaping from someone by shouting instructions which room to go to according to the map we see.

At about 5pm, most of the shows have ended and I was thinking about waiting for the closing show. Managed to catch the Disney parade back is Disneyland park around this time and shopped around as well as rested while waiting till 7pm. But alas, I found out the closing show is at 8pm and I decided not to wait further.

Headed back to Paris and back to hostel. On the way, I had a quick dinner in a Chinese restaurant called May Fa. After dinner, it's a short 5 mins walk back to hostel. When I returned to my room, I was shocked that all the chargers and adapters I left on my bed (as a result of rushing out in the morning) were all gone. Asked the reception about it and didn't have any luck.

Relaxed at the hostel a little and used the computer to try finding a Sony shop in hope of getting the charger for my camera's batteries. I started lying on bed at around 11pm+. When the nasty room mate was back, he wasn't happy to see me still in the same room. He even threated to punch me if I make any sound, including snoring, that keeps him awake. Didn't have a good rest as a result, though I was lucky to be safe.