I decided to go to the tourist information counter near Gesu Nuovo for help regarding my artecard (museum pass for Campania region). Unfortunately, they couldn't help me with the failed transaction and referred me to the artecard office in central station. Ah, so I have to go back to the central station again.

Made my way to the nearest metro station at Museo Archeologico Nazionale. To my surprise, the right line is actually one station away. Walked a long way to the other station and took the metro to the central station. The journey was only 1 station though. Went to the artecard office and finally managed to get help regarding my artecard purchase. Was given my artecard as well as the musem list and a map.

After getting my artecard, I decided to walk all the way back to hostel. Passed by a TIM shop and went in to purchase a prepaid SIM card. Paid €20 euros in total and was told that I can start using it (with data connection) one hour later.

Continued my way in the direction back to hostel and took quite a couple of photos on the way, including several churches which I don't remember/know the names.

Settled for dinner near Gesu Nuovo and ordered a pizza with coca cola. After the dinner, I went back to hostel and relaxed in the main hall until it was time for bed. 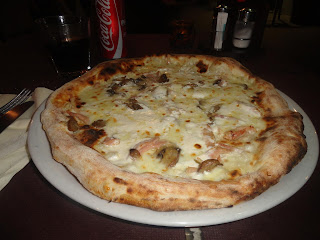