The day started with rain and I stayed in the hostel until about 10am+ when the rain turned light. Decided to start my day at Museo Archaelogico Nazionale. I used my artecard for free access into the museum.

I was pretty awed by the many exhibits in the museums, from sculptures to paintings to pottery and more. Headed towards central station again, but by walking this time round. Grabbed a quick bite of sandwich on the way to save time and money. 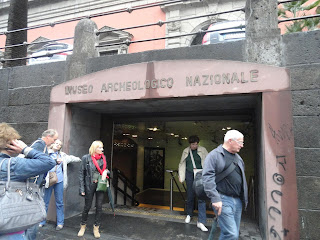 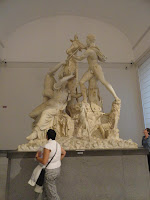 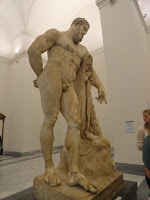 At the central station, I struggle a little before I find the circumvesuviana station. I paid €4.20 for a 2 way ticket to Ercolano. What really amused and confused me is that there is no route map in the station. When I hoped onto the train, I was pretty confused with the route map. It looked like my destination is quite far, so I took a seat and looked out specifically for Ercolano Scavi station.

Unfortunately, by the time I got really confused, I realised that I had overshot by 2 stations. Alighted quickly and took the train in the opposite direction. Had to wait quite awhile though since the frequency is quite low. Hopped onto the train and saw the train passed by a station called Ercolano. I didn't alight as I thought it is a different station. And again, I missed my station. Alighted at the next station and took another train in the opposite direction, finally reaching Ercolano. The estimated 30mins train ride took me almost 1.5hrs in the end. It seems that certain trains stop at every station, and certain trains go faster by skipping some stations. 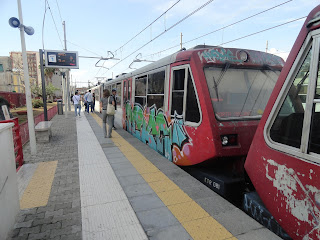 Ercolano, aka Herculaneum, is also an excavation site like Pompeii. It was also a city destroyed and buried by the ashes of Mt Versuvius in 17 A.D. It's a much smaller place than Pompeii and it's pretty easy to walk around in 2 or 3 hours. I took lots of photos here and also bought a magnet & guide book for souvenirs. 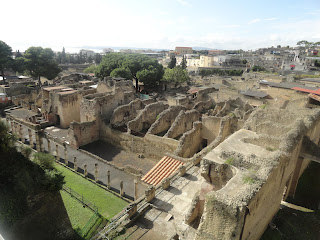 After exploring Ercolano, I headed back to Naples and took a long walk in the direction to the hostel. Passed by a supermarket called Flor Do Cafe and decided to go in to check it out. Besides, I wanted to stock up some food and drinks for my trip to Pompeii on one of my remaining days in Naples.

On the way, I also passed by Galleria Umberto (a very nice though small shopping arcade) as well as Teatro di San Carlo which is next to it. As I proceeded on, I stopped by Caffe Greco l.u.i.s.e nearby for dinner and ordered lagsana Napoletana. It was simple but pretty good. Headed back to hostel after the dinner and chilled out in the main hall until it's time for bed. 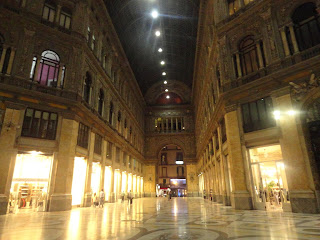