Woke up a little early at 8am+ and was glad the weather looks better than yesterday morning. I hanged around a little while in the main hall after breakfast and one guy was talking about a famous veiled Jesus sculpture in Naples. I decided to head my way to the chapel-museum (Museo Cappella Sansevero) to see for myself.

After a short walk and with the help of GPS as well as Google Maps, I managed to find the place. The original ticket price is €7, but I paid the discounted price of €5 as I had the artecard. It's a pretty small place and usage of photos/phone is strictly not allowed. The veiled Jesus sculpture lies in the middle of the hall and some other sculptures stand along the sides. There was also one other scuplture that has a fish net. I was pretty amazed at how good the sculptors were in the details of the fish net. After the short visit which lasted less than 15mins, I made my way to the central station.
Along the way, I discovered the day market which seems equivalent of what we call pasar malam in SG. There was one stall selling souvenirs cheaper than other places. Most of the other stalls sell clothes, shoes, bags, etc. The prices seem pretty good for European standards. A nice pair of leather shoes can cost just €20 or €30. 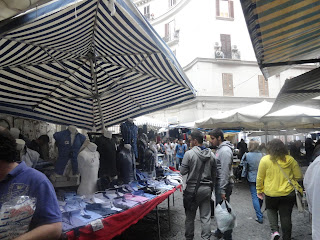 At the end of the day market, I spotted the central station at a distance or maybe 200m. Headed there and bought a circumvesuvania ticket to Pompeii for €4.50. Reached Pompeii at around 11:30am and started my discovery walk around. Spotted structures like the Forum, amphiteatre, theatres, bakeries, bath houses, and more. At about 2pm+, I realised the places I did not cover on the map are mostly casa (I guess they mean homes/houses) and very out of the way, i.e. far. So, I decided to skip them and headed back to Naples. 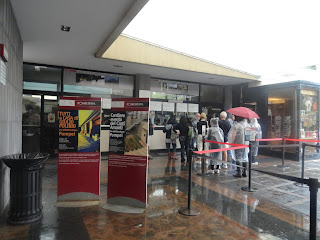 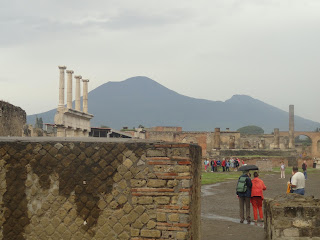 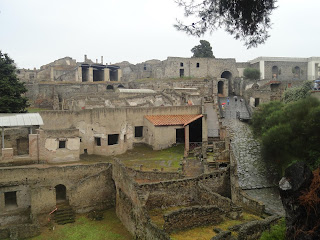 In Naples, I decided to visit Castel dell'Ovo but I couldn't figure out how to take the public transport there. After quite awhile of feeling lost, I decided to hop on a taxi. The short taxi ride costed me €14, which is not as bad as the €30 rip-off ride to hostel I had a few days ago. 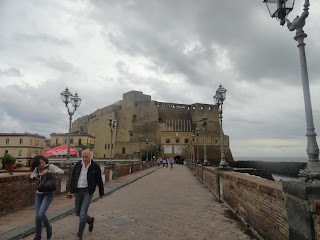 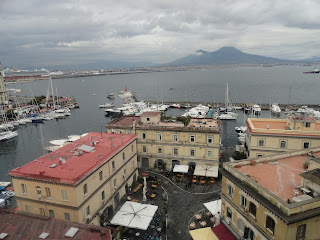 I climbed my way up the castle and there was a pretty good view of the port as well as a view of the hill where Castel Sant-Elmo is. Took quite a number of photos and rested for awhile before heading somewhere else. I walked along the roads near the coast in the direction of Palazzo Reale (royal palace). It was quite a long walk and I passed by Gallarie Umberto as well as Teatro di San Carlo again. Along the way, I spotted a restaurant recommended by tripadvisor. Unfortunately, it was only 6:55pm and dinner time starts at 7:30pm. I decided to continue walking further then. 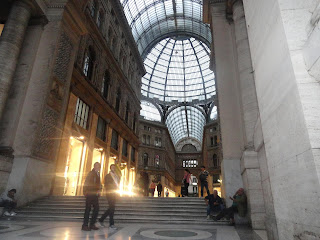 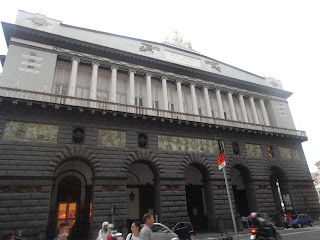 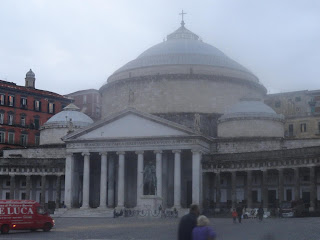 After some photos outside Palazzo Reale, I walked down the lively street without knowing where I was heading. After a long time, I realised I was heading in the direction further and further away from the hostel. I decided to back track to Palazzo Reale and walked back in the direction to the hostel. As I was getting near to the hostel, I dropped by a pizzeria and decided to try the original pizza in Naples, i.e. pizze margherita. Unfortunately, it wasn't exactly my cup of tea as it contained alot of tomatoes, mozerella and basil leaves. And I bought really like tomatoes as well as strange looking basil leaves on my food. Obviously, I didn't finish my pizza. Besides, it's quite big at probably 9" or 10". 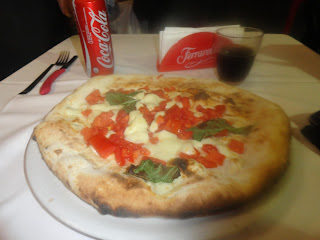 After the dinner, I returned to the hostel to hang out in the main hall before crashing on bed. Apparently, there is a Singaporean lady in the hostel today and was chatting awhile with her. She quitted her job and was having a long holiday in China, and now Europe.
on Sunday, October 14, 2012